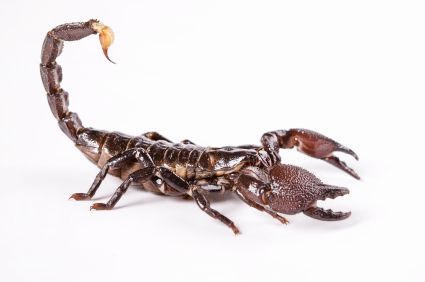 If you live in Arizona, you’ve probably met a scorpion or two. If you’re like most people, your reaction to this cringe-worthy creature falls somewhere between startled unease and full-blown hysteria. Thirty-six scorpion species live in Arizona, and all of them can sting, but only one poses any real medical threat. The bark scorpion is a creepy, aggressive critter, and its sting is one you’ll never forget.

Because they’re one of the most dangerous scorpion species in the world, it’s a good idea to know how to identify bark scorpions. They’re typically between one-half inch and three inches long, and their color varies from light tan or brown to orange. At high elevations, they may also have stripes. You can distinguish them from other scorpions by their long, slender tails and hands. Unlike most scorpions, bark scorpions often live in large communities or packs. Their favored habitats include wood piles, rock crevices, palm trees and other dark, cool places. Unfortunately, they’re also commonly found indoors. They like to climb, so you may see them walking across your ceiling or walls. You may even find one in your closet or under your sink.

Symptoms of a Bark Scorpion Sting

Perhaps the best way to identify a bark scorpion is by the symptoms of its sting, which usually will occur within three hours of the attack. Before you panic, be aware that although they’re painful and produce frightening symptoms, fatalities from bark scorpion stings are extremely rare. Symptoms include the following.

If you think you’ve been stung by a bark scorpion, obtain medical attention immediately. Stings are especially dangerous to small children and the elderly.

After being frozen for weeks during a lab experiment, newly thawed bark scorpions move around, and exhibit completely normal behavior as if nothing happened.

Bark scorpions are known to be temperamental and aggressive; they only sting when they feel threatened, but it doesn’t take much to annoy them.

The venom of a bark scorpion injected into insect prey quickly liquefies its target, so the scorpion can drink it.

Bark scorpions appear to have a green glow under ultraviolet light.

At Burns Pest Elimination, we’ve been successfully battling bark scorpions and their less dangerous cousins for more than 30 years. Don’t get stung by Arizona’s most dangerous pest. Contact us today for an estimate.