All You Need to Know About Fire Ants in Arizona 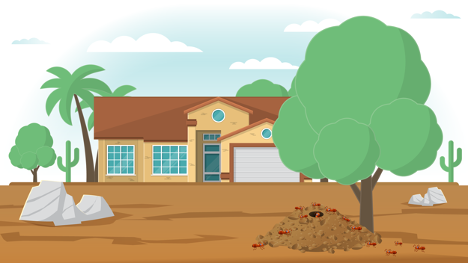 When you imagine a fire ant, you might envision a bright-red, angry-looking insect known as the red-imported fire ant—native to South America and generally found only in the southeastern United States as well as Southern California. While this type has made rare appearances in Arizona before, it is not established throughout the state. And that’s good news for Arizona residents, as the red-imported fire is known for its aggressive behavior and painful sting that can require medical attention.

Types of Fire Ants in Arizona

So, we’ve covered the notorious type of fire ant that’s not native to the American southwest, but which kind might you encounter around your Arizona or Nevada property? The three most significant species of fire ants in Arizona are Solenopsis xyloni, Solenopsis amblychila, and Solenopsis aurea. Not well-versed in Latin binomial nomenclature? Learn their common names and characteristics so you know what you’re dealing with, especially if you ever need pest control for fire ants.

S. xyloni, aka southern fire ants, exhibit similar behavior to the red-imported fire ant but are in fact different species.

Some identifying characteristics of southern fire ants include:

Their colonies tend to nest in loose soil, often near riverbanks, ponds, highways, and the bases of tree trunks. Indoors, southern fire ants are most frequently found underneath carpet, in crawl spaces, or inside wall voids.

The southern fire ant is the species that’s most likely to become a structural pest around your home, yard, or business in Arizona. If threatened, these ants swarm out of their nest and can inflict a painful sting or bite to the intruder. Also, southern fire ants may do damage to foliage by feeding on flowers and developing crops.

The other two species of fire ants in Arizona (S. aurea and S. amblychila) are both commonly referred to as “desert fire ants,” and their appearances are almost identical unless observed up close. 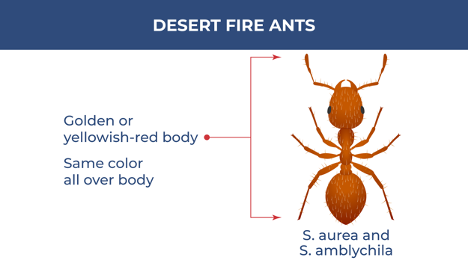 Some identifying characteristics of desert fire ants include:

Where and How Do Fire Ants Live?

While imported fire ants are typically found in southeastern states, native fire ants thrive in the arid climate of the southwestern U.S. As working insects, all fire ants nest in colonies. 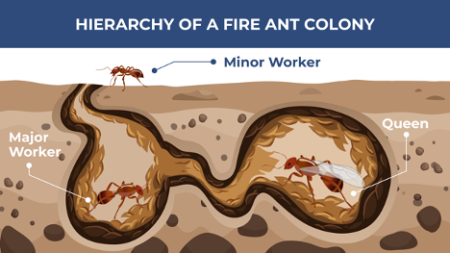 In Arizona during the summer, swarms of fire ants emerge, the winged reproductives mate, and the male reproductives die soon afterward. However, female fire ants move on to establish their own colonies as queens. Over time, a colony can expand to comprise up to half a million workers—making fire ant colonies unique in their ability to embody many, many individuals!

In yards and landscapes surrounding buildings, fire ants are usually noticed nesting under the ground, forming their signature mound of dirt at the surface. Around homes, they can also nest near the edges of walkways, steps, or cracks in pavement. Although they won’t destroy the structure of your home itself, fire ants may ruin landscaping elements with their tendency to migrate frequently from one site to the next and quickly develop new colonies.

The inside of homes—particularly kitchens—can be attractive to foraging fire ants when they seek out and scavenge for food. In occasional cases, fire ant nests can be built inside wall voids once they find entry points with easy access to resources.

What Are Fire Ants Attracted to?

In hot climates like Arizona’s, fire ants venture out of their nests to forage at night. Then, workers carry the food back and distribute it to the colony. Southern fire ants are more attracted to moist conditions inside and outside buildings, whereas desert fire ants are more inclined to stay nested within the natural outdoor environment.

As omnivores, fire ants feed on a variety of substances, such as grease, meats, sweets, seeds, and honeydew while also consuming spiders, worms, other insects, and young vertebrates including birds and rodents. They can even chew through clothing and other fabrics.

As mentioned, fire ants can (and will) bite or sting if disturbed. However, of the two types described, southern fire ants are more capable of inflicting medically significant stings. Symptoms vary among those bitten by fire ants native to Arizona; most adults will not need to seek medical attention for stings, but children may be particularly vulnerable. Fire ants can also be dangerous to individuals who receive multiple bites or are allergic or sensitive to their venom.

If stung by a fire ant, examine the affected area for excessive swelling, redness, or itching, and watch out for other symptoms that could indicate a severe allergic reaction such as nausea, sweating, thickening of the tongue, or shortness of breath. When in doubt, seek medical attention as soon as possible.

How Do I Prevent and Get Rid of Fire Ants?

As with other types of ants, there are basic preventative measures you can take around your home to avoid hungry, uninvited guests. Keep all pet food sealed away, trash cans contained and secure, and kitchen surfaces like shelves and countertops clear of food debris. Block off potential entry points such as cracks, holes, doors, and windows with caulk, petroleum jelly, or weather stripping.

If fire ants are spotted in your home, you can spray or douse them with soapy water on sight. Some bait applications can be effective in treating fire ants over time. Store-bought pesticides may kill some ants directly on contact, but this does not address the colony at the source. You should seek professional pest control in Arizona if you need to eradicate a fire ant nest at home.

Fire Ant Control and Removal in Arizona and Nevada

You know what they say: Don’t play with fire. If a fire ant colony’s mound has already marked its territory on your property, there could be multiple more mounds to come. But think twice before you try to take care of it yourself.

When you’re looking for fire ant control and removal services in Arizona or Las Vegas, leave it to the pest professionals at Burns Pest Elimination. Our expert technicians will inspect your home inside and out for conducive conditions and nesting sites for fire ants. Simply schedule your free inspection today to take back your home and yard from these biting insects, and start living fire ant-free!