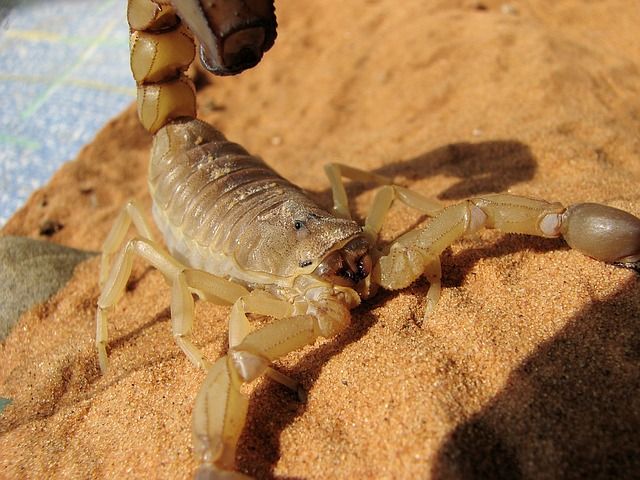 Stay Safe from the Lethal Sting of a Bark Scorpion

While it typically goes unnoticed, one of the earth’s most deadly and nightmarish predators is prowling along the desert floor. Even as you are reading this, the bark scorpion could be lurking outside your house with a venomous sting so powerful it could leave you frothing at the mouth and convulsing. Here is everything you need to know about the Bark Scorpion, as well as a few scorpion control tips you can use to keep these pests away from your home!

Scorpions are actually a part of the Arachnid family, meaning they are closely related to spiders, ticks, and mites. There are over 1,300 species of scorpions around the world, but they are all characterized by an elongated body, with a segmented tail tipped with a venomous stinger, and pincers on the front of their bodies. Although size can vary quite a bit between species, adults are typically around 2 inches long. They can also range in color from blue and black, to reddish brown, to yellow.

In the U.S. scorpions are commonly found across the Southern and Southwestern states. While they are known to be denizens of the desert, scorpions can be found in a number of habitats, including grassy meadows, caves, and even forests.

Even though they sting, the majority of scorpion species in the United States are non-venomous, with their sting similar to that of a wasp or bee. However one species found in the southwestern states of Arizona, New Mexico, California, and Texas are known for the damage their venom can cause. Typical reactions after a bark scorpion sting include severe pain and swelling at the sting site, numbness, frothing at the mouth, difficulty breathing, muscle spasms and convulsions.

The bark scorpion is pale and small yellow, making them very difficult to see, making their stings all the more common. Some stings have even been fatal if the victim is very young, very old, or has an allergic reaction to scorpion stings. If you or a loved one get stung by a bark scorpion, you should call your local poison control center and get medical attention as soon as possible.

Scorpions are also nocturnal, frequently hiding in cool dark places during the day, and coming out at night to hunt insects, spiders, other scorpions, and even smaller lizards, snakes, and mice. They use vibrations in the ground to detect and seek out their prey. A scorpion can go without a meal for up to six months, but will gorge themselves when they have an opportunity to eat. Typically scorpions enter Arizona homes in search of water and shelter.

How to Identify a Scorpion Problem

Due to their small size, scorpions can be difficult to spot, even when you are looking for them! However, a few things can indicate the presence of a scorpion infestation. For one, if you have seen another scorpion in your home, chances are you will see more before too long. You might also find empty scorpion exo-skeletons around your home (they tend to shed their exo-skeleton up to 7 times as they grow to adult size). Finally, if you suspect you may have scorpions in your home, a UV tracker light can help you find them easily. Scorpions have a bioluminescent compound that illuminates in black light.

How to Prevent Scorpions from Taking Up Residence

There are a number of things you can do to prevent scorpions from even getting near your house. For instance, removing any outdoor harborages for scorpions, such as piles of firewood, boards, trash, or stones near the house is the ideal place for a scorpion to stay cool during the day. You can also make sure that all points of entry, such as windows and doors, are completely sealed.

What to Do If You Have a Scorpion Infestation

Although you may be tempted to perform your own scorpion control, and as poisonous as a bark scorpion can be, this is a job better left to a professional. While you may have some success in applying your own scorpion treatment, a sting from a bark scorpion is not something you want to leave to chance. Burns Pest Elimination are the scorpion control experts in Phoenix, Tucson, Cave Creek, Mesa, Chandler, and all over southern Arizona! Call us now to schedule an inspection.