Arizona Scorpions: Get to Know the Dangerous Pest 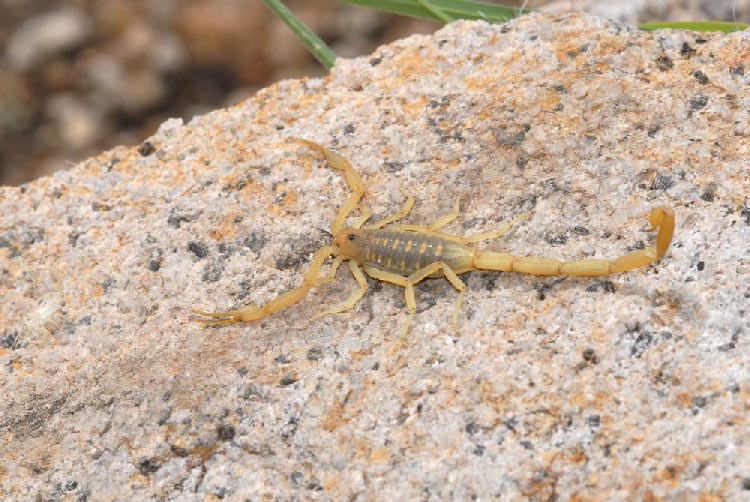 When it comes to pest-related panic attacks, Arizona scorpions are probably one of the state’s top causes. Knowing how to recognize the most threatening species won’t make scorpions seem any less creepy, but it could help you avoid the health consequences associated with a dangerous sting. Although more than 50 species call Arizona home, here are a few that you’re more likely to encounter.

The Arizona bark scorpion or Centruroides sculpturatus is the only species in the United States that’s considered deadly. You can recognize it by its long, slender hands and tail. It’s usually grey, tan, yellow or light orange in color, but species found at higher elevations may also feature stripes. Most bark scorpions are about two or three inches long, and they’re rarely solitary. If you see one bark scorpion, there are probably more nearby. The dangerous sting of the bark scorpion causes local redness, muscle spasms, tremors, random movements, anxiety, blurred vision, seizures, agitation, sweating and severe pain at the site of the sting. In rare cases, the sting can even be fatal. If you encounter a scorpion fitting the description of a bark scorpion, proceed with extreme caution; seek medical help immediately if stung.

The Hadrurus arizonensis or Arizona giant hairy scorpion is the largest species found in the United States. It can grow up to six inches in length and is covered by tiny, brown hairs. Its legs and pincers are yellow. Although it’s big, frightening and somewhat aggressive, the hairy scorpion’s sting isn’t particularly dangerous to humans. Pain and local skin reactions are common. Allergic reactions to the sting may cause difficulty breathing, hives, stomach pain, vomiting and swelling. Seek immediate medical attention if these symptoms occur after any insect bite or sting.

Another common species is the Vaejovis spinigerus or Arizona stripetail scorpion. It’s also called the devil scorpion due to its appearance. You can identify this species by the brown or tan stripes along the back of its tail, which is usually thicker than its hands. The devil scorpion may reach three inches in length, and its body has a lustrous appearance. Like most other scorpions, its sting is painful but not dangerous to humans.

The Vaejovis confusus or yellow ground scorpion is yellowish in color with slender hands and fingers. It closely resembles the bark scorpion but can be distinguished by its tail. The first two tail segments are usually wider than they are long. Although the mistaken identity has caused much panic among humans, the yellow ground scorpion’s venom isn’t dangerous.

Prevention is a far better alternative to fighting a scorpion infestation on your property. Here are a few tips to help you keep them at bay:

When Phoenix and Tucson residents and business owners spot a scorpion, they know who to call. At Burns Pest Elimination, we’re familiar with the various scorpions that call Arizona home. Let us manage your scorpion problem through careful investigation and targeted treatment, so you don’t have to fear a painful or dangerous encounter. Contact us to request a quote and learn more about our services.