Do Killer Bees Deserve Their Reputation? 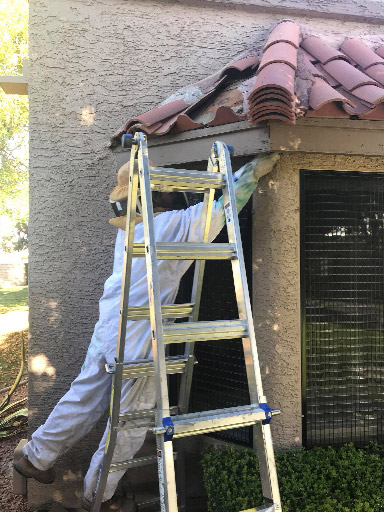 Africanized bees wouldn’t exist in the western hemisphere without a lot of help from mankind. In the 1950s, scientists in Brazil who were attempting to breed African bees with docile European honeybees allowed some subjects to escape quarantine. The so-called “killer bees” have spread steadily northward ever since, and their range now includes much of the southwestern and southeastern U.S.

Africanized bees actually are not more venomous than European honeybees, and, contrary to certain rumors, they can’t kill you with one sting unless you’re highly allergic and fail to get prompt medical treatment. They also can’t sting more than once. Hundreds of stings can kill a human or animal simply due to the total amount of venom injected, but people have been known to survive thousands of stings.

Another persistent myth is that Africanized bees look different from European honeybees. In truth, there’s very little difference in visual appearance, and only a scientist in a lab can determine if a bee is an Africanized hybrid.

If you see a swarm, contrary to popular belief, it’s not necessarily looking to attack. This is a misunderstanding based on cheesy, low-budget movie depictions of these creatures. While Africanized bees will swarm several times a year, they’re usually simply looking for a place to build a new hive. Although they can actually be slightly less aggressive at this stage because there’s no hive to defend yet, you should definitely err on the side of caution and not disturb a swarm that’s on the move.

Can You Handle the Truth?

Africanized bees are significantly more defensive than European bees and very sensitive to noise, vibrations, and incursions into territory around the hive, so great care should be taken when using landscaping equipment or encountering a hive in a remote location away from shelter. They are known to swarm quickly and in much greater numbers than typical honeybees. They will aggressively pursue the cause of any disturbance for a considerable distance from the hive; in fact, they’ve been known to attack up to a quarter mile away. They also remain agitated for a longer period of time once disturbed, which can lead to additional attacks.

Summertime in the desert is a peak time for attacks due to dry conditions that can stress a hive. Africanized hives are very large and indiscriminately located, especially near water sources in the desert. Never try to remove or relocate a beehive or swarm without professional help. If you find a swarm in or near your home or yard, immediately call Burns Pest Elimination for bee removal or relocation in metropolitan Tucson and Phoenix.