Fact or Myth, Do Butterflies Taste Through Their Toes? 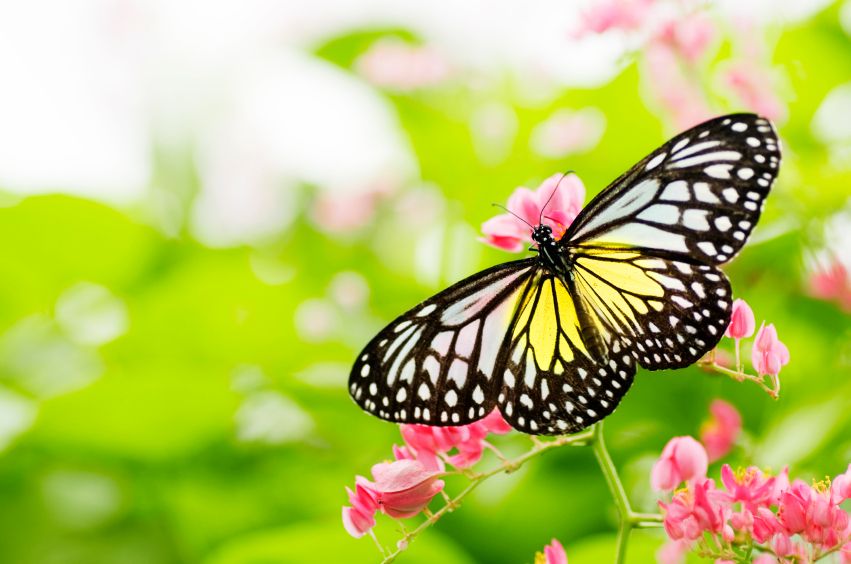 Well, sort of. Butterflies don’t have toes per se, but they also don’t have mouths or tongues. Rather, a butterfly will land on different plants and use special organs in its feet to sense dissolved sugars. This sort of “taste” is a very effective way to find food sources such as fermenting fruit.

While butterflies don’t have actual tongues, you may be familiar with a tongue-like appendage called a proboscis. Once a butterfly finds a likely food source, the proboscis unfurls and the insect sips up the meal, not unlike a human drinking through a straw. Incidentally, this means butterflies have to stay on an all-liquid diet, as their mouthparts can’t accommodate solid food. Anyone who’s ever suffered through a broken jaw can sympathize.

Speaking of the proboscis, adult butterflies don’t start out with theirs fully formed. Upon emerging from its chrysalis, each butterfly must work its two mouthparts together into a single, functioning proboscis using palpi adjacent to each part. If you happen to see a newly emerged butterfly, you might see it repeatedly curl and uncurl its proboscis over and over again, testing it out before it tries to drink.

A newly emerged butterfly has another problem to immediately address: It can’t fly. Inside the chrysalis, the adult’s wings stay curled up; after emerging, the butterfly has to pump body fluid through its wings to get them fully extended. Once their wings reach full extension, a few hours of rest are required for the wings to harden before they’re ready for normal flight.

Normal flight for a butterfly, by the way, is highly dependent on temperature. Butterflies have to maintain a body temperature of about 85 degrees Fahrenheit to live, and since they’re cold-blooded creatures, they’re at the mercy of the elements. If the temperature falls below 55 degrees, butterflies become immobile. Likewise, at temperatures above 100 degrees, they may overheat.

Given the restrictions of that temperature range, it’s unsurprising that many butterflies’ lives are only a season long, if that. Most butterflies live only two to four weeks, and some smaller species only make it a few days. On the other hand, monarchs and mourning cloaks, which go through the winter as adults, can live up to nine months.

While they rank pretty low on the food chain, butterflies have one huge advantage over most of the rest of the animal kingdom: their eyesight. Their eyes have five light-receptive cones, which allows them to see a broad range of ultraviolet colors that humans can’t even name. They use that exceptional eyesight for their two main tasks in life: finding the right flowers on which to feed and finding mates of the same species. There’s one major limitation to that eyesight, though; butterflies are all quite nearsighted, as they can only see clearly up to 10-12 feet away.

Butterflies are pretty harmless, but many other insect species can pose a threat to Phoenix and Tucson homeowners. At Burns Pest Elimination, we’re proud to be Arizona’s leading pest control experts. Contact us today.